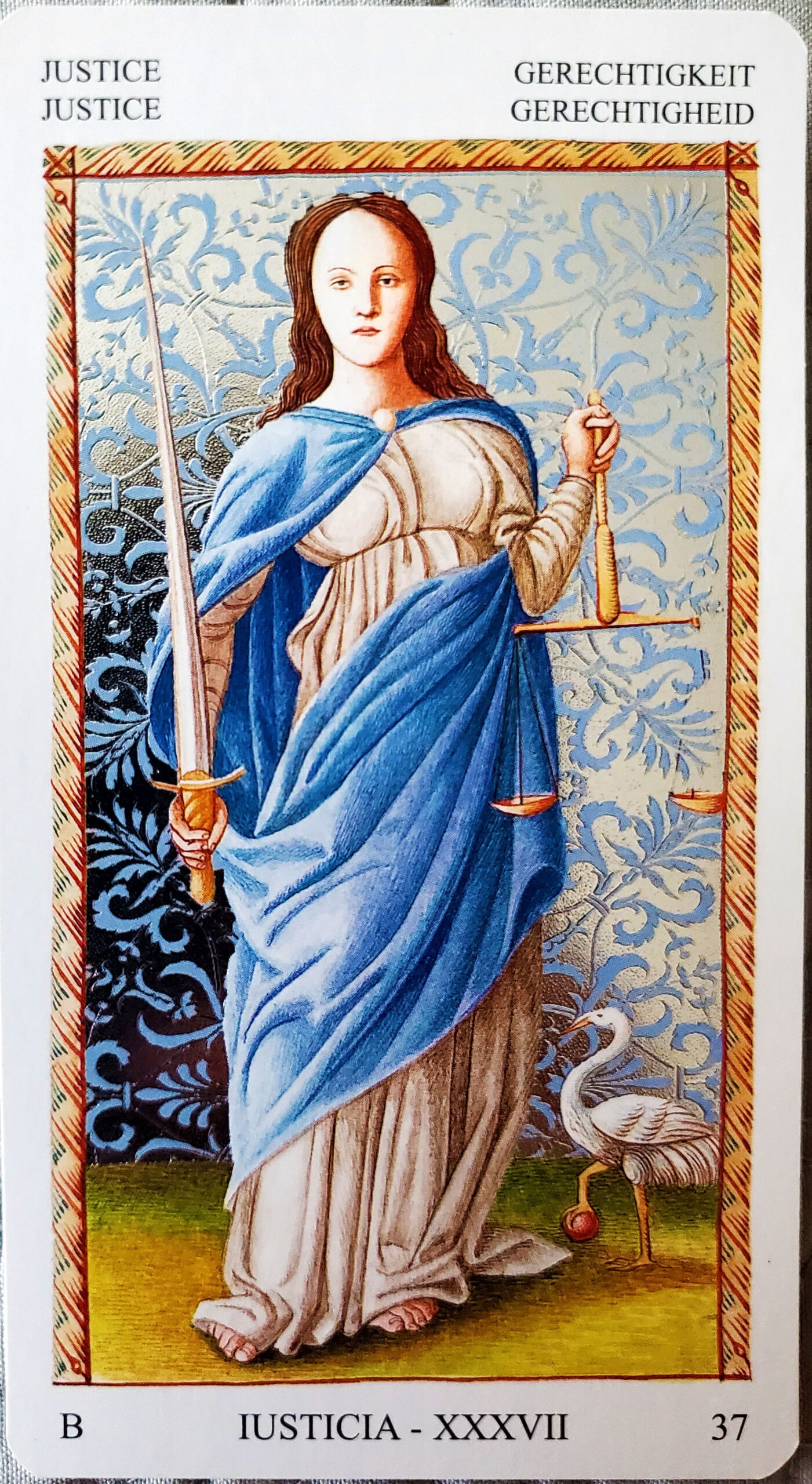 Justice is the 37th image in the Mantegna deck. Cards 31 through 40 can be grouped together, since they represent various virtues. This group of virtue images starts with 3 mysterious cards: Iliaco (card 31), Chronico (card 32) and Cosmico (card 33). The last 7 images from the group are the 7 virtues. The seven virtues can be divided in cardinal virtues (Temperance, Prudence, Strength and Justice) and Christian virtues (Charity, Hope and Faith).

There is probably some symbolism in the order of the cards. The cardinal virtues are sometimes called the classical virtues, since they appear in the writings of classical authors like Plato and Cicero. The Christian virtues were probably seen as the last ingredients of a truly virtuous life.

The position of Justice as the last of the cardinal virtues and followed by the theological virtues may also be intentional. Justice can be viewed as the virtue that brings harmony in both heaven and earth. Plato talks a lot about justice in his Republic. In Christianity, the final or last judgement is a major theme. Thus, justice plays a major role in both secular and sacred matters. The central role of Justice was also depicted in a symbolical manner by Raphael in his “Cardinal and Theological Virtues” (see this Wikipedia page).

The Weighing Scale or Balance

The symbolical association between the weighing scale and justice is very ancient. In ancient Egypt, the scale is associated with Maat, the goddess of law, morality, harmony, truth and justice. In the Book of the Dead, the deceased person must pass the Weighing of the Heart test. The test consists of weighing the heart of the deceased against the feather of truth. The feather of truth was an ostrich feather, which was the symbol of Maat.

The two sides of the balance can be taken as the evidence of guilt and evidence of innocence. In modern times we have the prosecution and defense.

It is important to mention that any complex civilization requires a standardization of weights and measures. You need to establish standards for weights and measures for the purpose of taxation, commerce, issuance of currency etc. In the market you want to be sure that the weighing scale or balance has equal arms and that the measuring weights have the proper weight. A lot of court cases in the history of humanity were probably about cheating using mislabeled weights or unfair weighing scales. In the Bible we have the following warning:

and dishonest scales do not please him.”

The sword as the symbol of law enforcement can also be seen in the “Authority of Law” by James E. Fraser. “Authority of Law” is one of the two statues besides the front steps of the US Supreme Court building. The statue can be seen here.

Crane holding a pebble or stone

Besides Justice, we can see a crane holding a stone with the claws of one of its feet. The crane is a symbol of vigilance. In Natural History by Pliny the Elder we have the following quote:

“When they rest at night they have sentries who hold a stone in their claw; if a sentry begins to fall asleep the stone falls and wakes him. All the other birds sleep with their head under their wing, except for the leader, who keeps watch.” [1]

It’s useful to point out that there are alternative allegorical representations of Justice. For example, some artists represent Justice with blindfolds. The blindfolds are meant to represent impartiality, since justice should not care about your social status, race, ethnicity, gender and other characteristics.

A good source for various imagery related to justice, I recommend the book “Representing Justice” by Judith Resnik and Dennis Curtis. This is a massive book with many useful images and explanations.