If you want to begin stargazing, there are a few free tools that can help you understand the night sky. On your computer you can install a free-software planetarium such as Stellarium. On your phone you can install Stellarium or Sky Map. These are powerful and useful apps, but if you are like me, you also want a nice physical book that maybe you can use in the field. I believe that the Atlas by Sparrow is a useful book for the beginner stargazer. 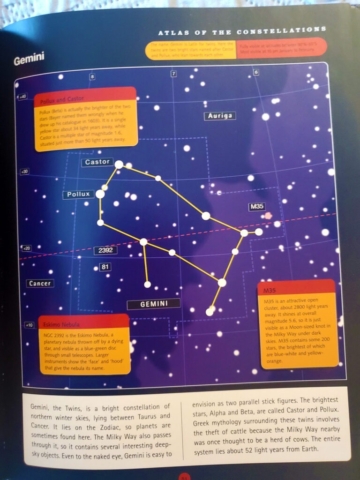 One reviewer from amazon mentioned that on page 76, you find a star called “Algenib” which is usually know as “Mirfak”. It appears that “Mirfak” or Alpha Persei was sometimes called “Algenib”. Right now, the name “Algenib” is reserved only for the star Gamma Pegasi, according to IAU (International Astronomical Union). This is not the only example of confusing nomenclature. The book itself points out that the star Pollux or Beta Geminorum is actually brighter than Castor or Alpha Geminorum. According to the Bayer Designation, the brightest star in the constellation should be the alpha, the next brightest should be beta, and so on following the standard order of the Greek alphabet (which has 24 letters). I believe that in some constellations the gamma star is actually the brightest (like Gamma Draconis). These errors persisted since 1603, when Johannes Bayer wrote Uranometria. This seems to be one of the cases where the tradition trumps logic or truth.

Overall, I can say that I enjoy this book. You get a basic understanding of the map of the night sky and the history or mythology behind the constellations. As a bonus, you also learn a few Latin words and even some biology. I was not aware of flying fish before reading this book (one of the constellations is “Volans” or flying fish). The book can be complemented by the free software I mentioned in the beginning. After I learned more about the constellations I got motivated to take my binoculars and go stargazing in a more dark area of my neighborhood.