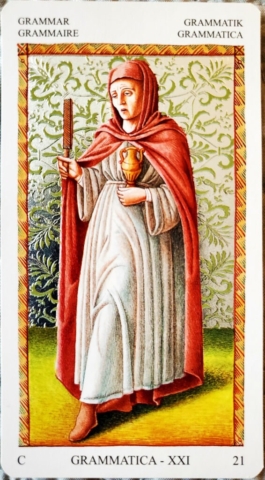 In this post I want to explore the symbolism found in the Grammar card from Mantegna Tarocchi. Some of the symbolism can be traced to earlier sources, while some things require some speculations.

You don’t need to be familiar with the Mantegna Tarocchi to appreciate the symbolism. If you want to read about this mysterious tarot deck, you should check this source and this source.

The Mantegna Tarocchi is made of 50 prints of allegorical images. The prints are numbered, so they can be put in numerical order. The prints from 21 to 30 form the liberal arts group. This group contains the seven liberal arts with the addition of poetry, philosophy and theology. The seven liberal arts can be divided in Trivium (grammar, logic and rhetoric) and quadrivium (geometry, arithmetic, music and astrology).

There are a few irregularities in the Mantegna deck. In other sources that deal with the seven liberal arts, you usually see astronomy instead of astrology. It’s also curious that astrology has number 29, which is between philosophy (number 28) and theology (number 30). Astronomy is usually the last of the 7 liberal arts, so you would expect astrology to be number 27. Finally, it’s also useful to point out that some sources put dialectic instead of logic.

The first symbolical element that I want to discuss, is the large file Grammar is holding in her right hand. The association between Grammar and the file first appears in the allegorical book “The Marriage of Philology and Mercury” by Martianus Capella (De nuptiis Philologiae et Mercurii ):

“She also bought out a file fashioned with great skill, which was divided into eight golden parts joined in different ways, and which darted back and forth – with which by gentle rubbing she gradually cleaned dirty teeth and ailments of the tongue and the filth which had been picked up in the town of Soloe.” [1]

Soloe , Soli or Soloi was a city on the coast of Cilicia (Asia Minor) that was proverbial for the bad Greek spoken there. The English word solecism is derived from the name of the city. One of the meanings of the word solecism is: an ungrammatical combination of words in a sentence. By extension, we can say that the file is the symbol of proper speech and maybe even proper writing (since the two go together).

In her left hand, Grammar is holding a vase. In the description of Capella, Grammar doesn’t hold a vase. The vase appears in later allegorical representation of Grammar. For example, a vase appears near Grammar in an allegorical image from Somma di Tutte le Scienze by Aurelio Marinati. 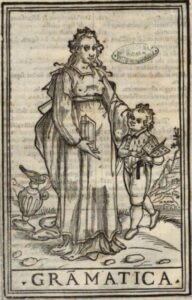 In the painting “Allegory of Grammar” by Laurent de La Hyre, we can see Grammar watering some plants with water from a vase. Laurent was most likely inspired by the allegorical representation of Grammar from a French edition of Iconologia (see my review of the book here). 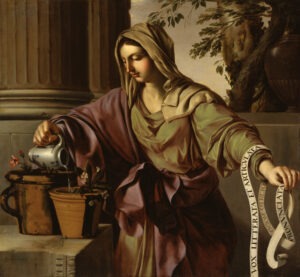 My interpretation is that the vase with water represents grammar. As the plants need water to grow, so man needs grammar to grow in learning. You need to learn to read before you can read books on your own.

In Margarita Philosophica by Gregor Reisch, the importance of grammar is illustrated in a different manner. Grammar holds the key to the tower that hosts the liberal arts. But overall, the same idea is implied. You cannot achieve higher learning without grammar.

Another point to consider is that in medieval times the seven liberal arts were connected to the seven planets. In Convivio Dante compares grammar to the moon. In medieval conception, the sub-lunar plane is the place where things change. In the planes above the moon, things are perfect and eternal. In a way the analogy works for grammar. Languages also change, and some languages die in time. Even Dante quotes from the Poetics of Horace:

“Many words shall be born which have long since fallen out of use.” [2]

Overall, the idea is that grammar is greatly affected by the cycles of time. She can still be immortal, since some grammatical principals are universal.

[1]Martianus Capella and the Seven Liberal Arts: Volume II The Marriage of Philology and Mercury translated by William Harris Stahl with E.L. Burge