I am not an artist, but I love art. As an amateur mathematician who is interested in geometry (also Lill’s method), it should not be a surprise that I am interested in visual arts. One of my main hobbies is trying to discover interesting paintings, especially paintings created before 20th century. I am not a fan of modern or post-modern paintings.

I already have a few posts related to art or paintings. My previous posts dealt mainly with the symbolism found in various paintings or illustrations. However, in this post I just want to share some of my favorite paintings. I will not do an in-depth analysis of each painting, but I will discuss a few historical details and share why I found each painting fascinating.

The Choice of Hercules  by Annibale Carracci

My fascination for this painting is due to a few reasons. The story of a hero overcoming hardships is the theme of so many European myths, legends or fables that I read since I was young. When I was very young, I had a book with Slavic fables translated in Romanian. While I was in college I read a lot of the Greco-Roman literature. Of course, Hercules or Herakles is a Greco-Roman character, but his archetype is mirrored in many other European characters.

I am also interested in philosophical questions about the nature of virtue. I am probably mainly influenced by the stoics, since I also read a lot of philosophical writings from the Greco-Roman era. I believe that a few stoic philosophers actually wrote a few philosophical treaties about Hercules and his virtues, but these writings are lost. It seems that the ancient philosophers also saw Hercules as an archetype of virtue. In fact, I also wrote a post about some allegorical or metaphorical interpretations behind the story of Hercules (based on a essay by Lucian of Samosata).

In the future I will write a post where I will do an in-depth analysis of this painting and parable. For now, I also want to make you aware that Handel composed an Oratorio called “The Choice of Hercules“. I never listened to all the movements, but I like the movement called “Lead, goddess, lead the way!” 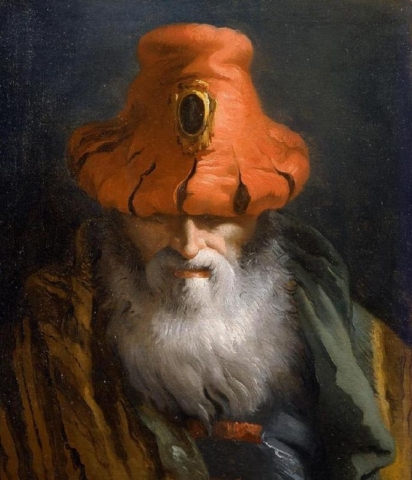 This painting doesn’t seem to have any mythological or symbolical connections like the previous painting. You can learn more about this painting at this external link.

The philosopher from the painting looks like a more colorful version of Gandalf from The Lord of the Rings. The fact that you cannot see his eyes, makes him more mysterious. The jewel on his hat makes him seem that he has the mystical third eye.

Desolation by Thomas Cole (The Course of Empire)

“Desolation’ by Thomas Cole is a painting that falls more under the category of capriccio paintings, since it shows a fantastical setting. The painting is the 5th and the last painting from the “Course of Empire” series of paintings created by Cole. The series shows the cycles of civilization from birth to fall or desolation. Maybe the series was inspired by the books such as “The History of the Decline and Fall of the Roman Empire” by Edward Gibbon.

In many ways I think that the painting fits better with our times, than the time of Thomas Cole. I do believe that the European civilization or “The West” is in decline. Maybe you can argue that our time is better described as the transition from “The Consummation of Empire” to “Destruction“. Nonetheless, despite the technological advances we see, I feel that a lot of positive aspects of our civilization are moving in a negative direction and that we are moving towards a dystopian age of some sorts (a dystopian age that is usually depicted by the cyberpunk genre).

However, when I see ancient ruins I don’t see only decay. In fact, I see many ruins as beauty, virtue and wisdom surviving the test of time. I still see Greco-Roman architecture as the pinnacle of beauty. Even if the ruins are not beautiful, the ruins probably survived the ages due to great engineering. Ruins can be a remainder that great things can be achieved and that we should learn from the past.