Since antiquity, the palm tree had a few symbolical associations. In various ancient civilizations, the palm tree or the palm branch was the symbol of victory, triumph, peace or eternal life. There is a lot of interesting info on the “Palm branch” Wikipedia page.

In this post I want to focus on the symbolical association between the palm tree and victory. I tried to find why the palm tree was the symbol of victory in the Greco-Roman world.

Origin of the symbolism

The Wikipedia page about the “Palm branch” has a useful paragraph that may explain why the palm tree or the palm branch was the symbol of victory [1]:

“In Archaic Greece, the palm tree was a sacred sign of Apollo, who had been born under a palm on the island of Delos.[8] The palm thus became an icon of the Delian League. In recognition of the alliance, Cimon of Athens erected a bronze statue of a palm tree at Delphi as part of a victory monument commemorating the Battle of the Eurymedon (469/466 BC).[9] In addition to representing the victorious League, the bronze palm (phoinix) was a visual pun on the defeated Phoenician fleet.[10] From 400 BC onward, a palm branch was awarded to the victor in athletic contests, and the practice was brought to Rome around 293 BC.”

Another explanation of the symbolism is given by Aulus Gellius in the third book of Attic Nights. The 6th chapter or topic of the third book is entitled “On the natural strength of the palm-tree; for when weights are placed upon its wood, it resists their pressure.” The chapter gives the following explanation [2]:

“A truly wonderful fact is stated by Aristotle in the seventh book of his Problems,​27 and by Plutarch in the eighth of his Symposiaca.​28 “If,” say they, “you place heavy weights on the wood of the palm-tree, and load it so heavily and press it down so hard that the burden is too great to bear, the wood does not give way downward, nor is it made concave, but it rises against the weight and struggles upward and assumes a convex form.​29 It is for that reason,” says Plutarch, “that the palm has been chosen as the symbol of victory in contests, since the nature of its wood is such that it does not yield to what presses hard upon it and tries to crush it.”

Talking about symbolism is not fun if we don’t mention o few interesting paintings or images. The first image is “Allegory of Victory” by Mathieu Le Nain. 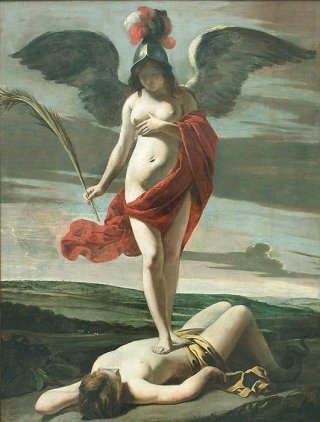 In many editions of Iconologia, Victory is also shown with a palm branch. Below there is an image from an English edition and a French edition of the Iconologia. 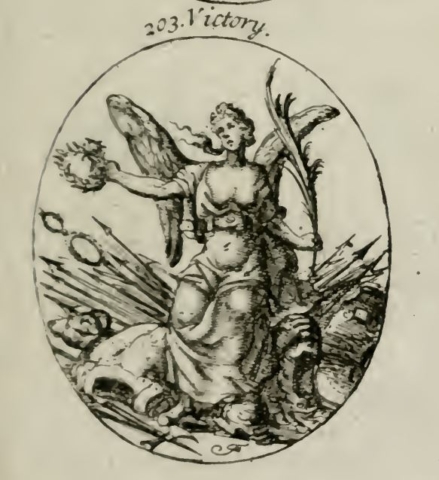 One of my favorite paintings is “The Choice of Hercules” by Annibale Carracci. Behind the figure of Hercules we see a palm tree. The palm tree hints to Hercules’s future victories over many hardships like the 12 labors and other challenges. 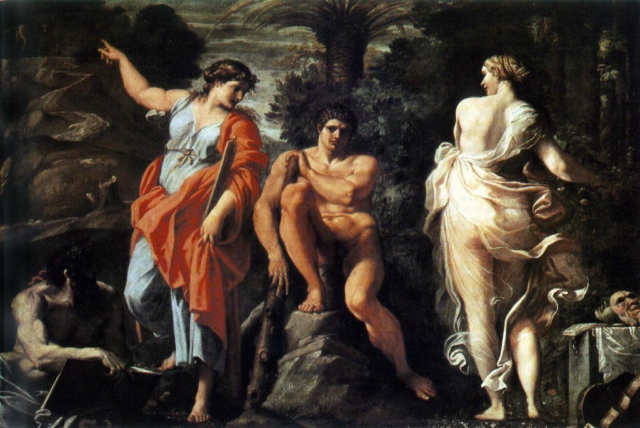 Another relevant image is “Allegory of Fortitude” by Luca Giordano. You can see the painting on the website of the National Gallery (UK). The figure that holds the laurel crown also holds a palm branch( the figure probably represents Honor).